15th June 2010 - Speaking at State House Press conference in his honour, the Secretary-General disclosed that he saw amputees playing football the previous day and was very impressed with their courage and fortitude.
"I was moved." He said. "You have gone through tragic conflicts and so many unconstitutional changes which have brought pain to many people. The UN holds that there must be justice. We know that the TRC made many recommendations which we hope will be implemented," the Secretary-General said.

"We must heal those wounds transcending all political considerations as peace can only be temporary, if there is no justice." He said. "Sierra Leoneans now have a new sense of hope as all eyes are on the people and Africa. This country has proved that it can make democracy work" he stated.

He also commended President Ernest Koroma for ensuring that the country has a free media especially with the establishment of the Sierra Leone Broadcasting Corporation (SLBC). 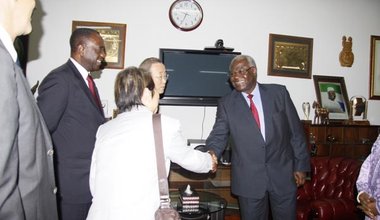 "The smooth transition from peacekeeping to peace-building will serve as an example to others." He stated.

He also commended President Koroma for the introduction of a Free Health care delivery system, which is stated would serve as a foundation for a free society, and that the UN has been a proud partner and will continue to stand by the country.

Responding, President Koroma expressed thanks to the Secretary-General for his visit and stated that Sierra Leone was used as an experiment in UN peace effort, with the biggest multinational peacekeeping force ever put together. "We are committed to ensuring peace and this is why we have adopted the Agenda for Change," the President said.

He also promised to expand on his set agenda as he is happy with the UN's response to the country's agenda for development.

President Koroma also assured the visiting Secretary-General of the UN that his government will continue to build institutions for democracy and that they are working hand to put things in place to achieve the Millennium Development Goals by 2015. 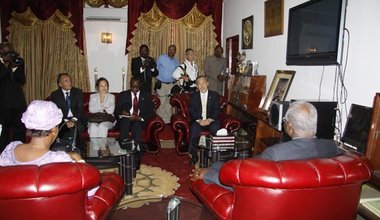 "We are grappling with the youth unemployment problem and that is why we are setting up a National Youth Commission which we hope will provide skills training for them," the President said.

On the forthcoming third post-conflict General Elections of 2010, President Koroma promised that they will ensure that all players maintained the democratic gains made so far in alignment with the UN vision.

Later, the Secretary-General was present at the SLBC , where the President commissioned the new corporation and handed over all its new equipment, worth over $2m to the trustee. The Secretary-General said the new public broadcaster is a gift to everybody in Sierra Leone.

"A decade ago, the means of communication was bullets and guns, but now it is peace, " he said.