‘NO DISCRIMINATION IN THE USE OF SLBC… PRESIDENT KOROMA WARNS

‘NO DISCRIMINATION IN THE USE OF SLBC… PRESIDENT KOROMA WARNS

15 June 2010 - President Ernest Bai Koroma says there should be no discrimination in the use of the Sierra Leone Broadcasting Corporation (SLBC) facilities and equipments. He made this statement during the commissioning of the SLBC facilities and handing over of the equipments to the chairman Board of Trustees of the Station, Prof. Septimus Kaikai. According to Mr. Koroma, no political party, civil society, paramount chief or any other person or persons should not be prevented from using the station's facilities and equipments.

He commended the United Nations Peace-building Office in Sierra Leone (UNIPSIL) for donating the sum of US$800,000 and its modern radio equipment in addition to the US$2 million that the government provided to ensure the broadcaster covers the entire country.

"The former SLBS now SLBC was in a poor state," President Koroma pointed out, adding that it was his dream to see the station be the envy of the sub-region. 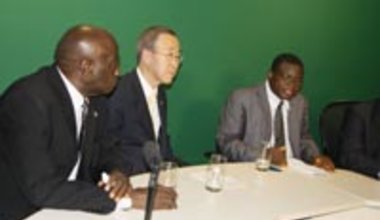 In his commissioning statement, Koroma said the event marked a milestone in the promotion of democracy in Africa. His administration, he maintained, was the only government in Africa that has transformed its only mouthpiece into a corporation.

A Transitional Management Team (TMT) was set up to facilitate the transformation of the SLBC into a corporation. The President urged members of the Board of Trustees to be committed, as no voice would be marginalized in the use of the facility".

"I believe this station is going to be used in all districts, towns and villages in a democratic manner", he said, but was quick to stress that fair play and accountability must be upheld.

UN Secretary-General Ban Ki-Moon, who also witnessed the commissioning ceremony, said the decade-long civil war plunged Sierra Leone into darkness, recalling that during the peace process the only tool was the UN radio which had sub-stations in all districts across the country.

He reminded the gathering that the UN had conducted two successful democratic elections, thus giving credit to the people of Sierra Leone for their support.

He thanked members of the former UN radio and commended parliament and the SLBC chairman for the successful passing of the SLBC Act.

"Journalists should practice their profession without being criminalized." He emphasized but cautioned that they must also respect the rights of other people.

The UN Secretary General assured that Sierra Leone will continue to receive unremitting support from the UN.

The people of Pujehun and and Kabala its environs can now receive signals from the newly established Sierra Leone Broadcasting Corporation (SLBC) after the Government of Sierra Leone in collaboration with the United Nations Peace-building Mission in Sierra Leone (UNIPSIL) officially inaugurates two 1000w radio transmitters which are now transmitting on FM99.0 megahertz in Pujehun and 98.0Megaherzt in Kabala.

In his address the Minister of Information and Communication, Ibrahim Ben Kargbo told the people of Pujehun that since the former SLBC was transformed from state owned to public broadcaster (SLBC) his government and UNIPSIL have been working closely to expand and make the frequency accessibly to every corner of Sierra Leone and even beyond. He said the inauguration of the 1000w transmitter is a demonstration of his government commitment in ensuring that every citizen has equal access to information.

He went on to plead to the mobile companies operating in Pujehun to help supply electricity to the radio station so that the people of Pujehun can benefit from uninterrupted information the SLBC is providing for the country.

The Executive Representative of the United Nations Secretary-General, Michael Schulenburg said Sierra Leone has made history by becoming the second African country to own a public corporation radio and Television after South Africa. He encouraged the people of Pujehun to embrace the SLBC and pledged the UN's total support to the corporation.

The Chairman of Pujehun District Council Sadique Sillah thanked the UN and the government of Sierra Leone for such a mile stone development in the democratic history of Sierra Leone. He said in the past people of Pujehun and Kabala were deprived of radio signals from Freetown and as a result people were not well informed about events happening in the capital. He hoped that with the inauguration of these new transmitter people will start receiving first hand information about the country's developmental strides and other happenings.