08 March 2013, Freetown - As the women of Sierra Leone stood side by side in solidarity towards achieving gender equality and women's empowerment, H. E. Dr. Ernest Bai Koroma was standing right beside them, encouraging them to press on, saying "I will deliver more". During the celebration of the International Women's Day, 08 March, in Freetown, President Koroma promised the women of Sierra Leone that he will enact the gender equality bill; establish a National Women's Commission; and address all the issues raised by the women in the Agenda for Prosperity, the country's third Poverty Reduction Strategy Paper.

In recognition of their collective gains in shaping the future of their country, society and family, President Koroma declared that 08 March will henceforth remain a national holiday.

Referring to the theme for this year's 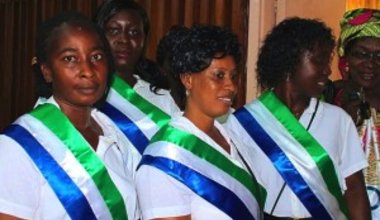 celebration, "Gender Agenda Gaining Momentum", President Koroma said that Sierra Leone women are on the move and "there shall be no retreat in our gender agenda gaining momentum". Whilst delivering his keynote address, the president seized the opportunity to thank the women for turning out in a greater percentage to register for the elections. He saluted the women for their strength, character and resilience which have seen the nation through years of war and the prevailing peace. He assured the women that he will deliver on more initiatives to narrow the gender equality gap in the country, as he stated "I know the women and girls will do even more towards the development of my country". The President called upon his effective gender minister, Mr. Moijue Kaikai, to ensure the full implementation of national and international instruments that will help women access and claim their rights.

The women highlighted their strengths which make them unique actors and powerful agents of change to the president and the visiting high level delegation, and further urged the president to take the lead in mobilising domestic resources and to "help us to help you". They applauded the president for his drive to achieve gender equality and women's empowerment, referring to the free health care initiative for children under five, pregnant and lactating mothers, the gender justice related laws, and his appointment of women into key decision making positions such as – Chief Justice, Auditor General, National Electoral Commission, Sierra Leone Roads Authority and National Revenue Authority, and for newly created positions – minister of state, gender advisor and special executive assistant to the president. 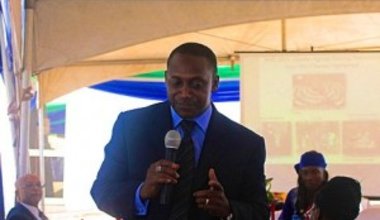 Identifying a common agenda with the president, to improve the lives of human beings in Sierra Leone, Dr. Kandeh Yumkella, a Sierra Leonean national and Director General of the United Nations Industrial Development Organization (UNIDO) said "Mr. President, we are here". Dr. Yumkella, who was leading the delegation, pointed out the technical expertise of his team and assured the president and the nation that they had arrived to discuss the solutions to women's access to energy; affordable, accessible and available health care; good governance and entrepreneurship. Dr. Yumkella told the audience that it was time "to look beyond problems, and open up to opportunities and possibilities". He, like all the other delegates, commended the determination of the women of Sierra Leone and stressed the need for them to focus on substance and work together, bearing in mind that they are as strong as their weakest link

President Koroma was re-elected into his second, 5-year term of office in November 2012 and his cabinet is made up of 14% women. The recent presidential, parliamentary and local council elections brought 12 % of women into parliament and 19% to local councils – with 8% as chairs. Sierra Leone has only one female mayor (out of 6) and 13% women represented at paramount chieftaincy levels.