UNIPSIL HRS joined the Human Rights Commission of Sierra Leone (HRCSL), other human rights partners and the global community to celebrate the International Human Rights Day, on 10th December 2011. The theme of this year celebration was "human rights defenders and the social media". Celebrations were held in all regions of the country.

In Freetown activities included a march past from the Human Rights Commission Office at Tower Hill to the new YWCA Hall. Participants of the march past included staff of HRCSL, UN agencies, school children, civil society groups, members of the Parliamentary Human Rights Committee, various other organizations and other citizens who joined the marching procession. Participants were dressed in celebrative t-shirts amidst music and drumming from five different bands and carried placards with human rights messages. At the YWCA Hall, key stakeholders made speeches and young human rights "artists" performed their pieces. In his statement, the Chairman of the HRCSL linked this year's theme to the need to enact the Freedom of Information bill. The Minister of Social Welfare, Gender and Children Affairs, Hon. Steven Ngauga renewed the commitment of his Ministry in protecting and promoting the rights of vulnerable groups, especially children, women, persons with disabilities and elders, and advised the many young participants in the event to make the best use of the possibilities offered by the social media. UNIPSIL HRS Chief put the celebrations into the context of human rights developments occurred globally in 2011, where the quest for dignity and the use of internet were the engine of the so called " 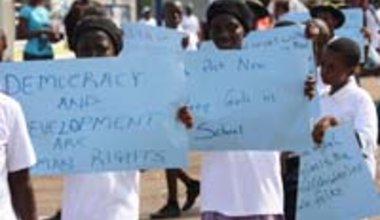 Arab spring". In a keynote address, the assistant representative of UNFPA, Ms. Mariama Diarra, further explored the link between social media and human rights defenders. In the context of the celebrations, Journalist for Human Rights (JHR) awarded 4 journalists in recognition of their work after completing a training on journalism and human rights with the support from UNIPSIL HRS. The programme also saw the launching of the Human rights commission's website and viewing of a documentary on the commission's five years in office.

In Kenema celebrations were marked with live phone-in radio discussion programmes on the eve of the event (9th December 2011) to reflect on issues surrounding the theme. Activities of 10th December commenced with a float parade comprising ten secondary and primary schools, the Sierra Leone Police, Prison personnel, members of the Kenema District Soweis Association, members of Kenema District Human Rights Committee and representatives from women and other civil society groups. The official ceremony took place at the Eastern poly technique Assembly hall where statements were made by Deputy Chief of police, Principal Eastern poly technique, UNIPSIL and HRCSL. 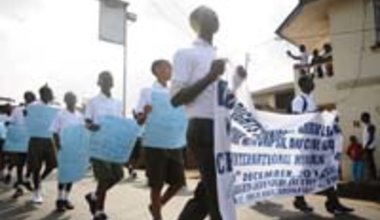 issues including the launching of hotlines to contact relevant authorities for the reporting of human rights violations and abuses. On 10th December a Float Parade - involving the members of the cell companies and media practitioners, CSOs and students culminated in a symposium at the Koidu City Hall. The Celebrations were chaired by Rev Bob Kandeh (Outreach Officer) of the Special Court for Sierra Leone. A skit by stand up comedians portraying the use of the social media by Human Rights defenders to report human righst violations formed part of the celebrations.

In Bo the celebrations attracted over one hundred and fifty people who converged at the Women's Partnership for Justice and Peace (WPJP) Hall. Statements relating to the theme were made by representatives of the Human Rights Commission in Sierra Leone, UNIPSIL HRS and representative from National Telecommunications Commission (NATCOM)