08 March 2013, Freetown - Wife of former British Prime Minister Tony Blair, leading lawyer and committed campaigner for women's rights, Madam Cherie Blair has advised the Government of Sierra Leone to speedily take heed of the women's call for the enactment of the gender equality bill during the unique celebration of the International Women's Day. Madam Blair made this call to H. E. Dr. Ernest Bai Koroma and all the other members of his executive, the judiciary and legislative arm of government present at the ceremony during her address to thousands of women from the national and international diaspora, in Freetown.

Madam Blair, who was part of a nine person high level panel in Sierra Leone, warned the audience not to leave the implementation of the laws in the hands of the president and his cabinet alone but urged the women of Sierra Leone to be involved, right through the processes, 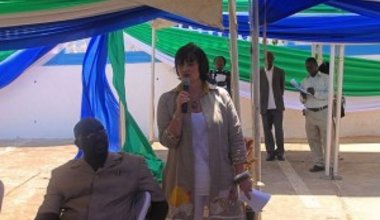 from the people in the villages to the community leaders and security and law enforcement bodies. She further stressed the need for the government to do more in protecting the rights of women saying "laws are not enough". She assured the women that they were not alone in their struggles, adding that the issues brought out in their presentation affects women right around the world. She commended the women of Sierra Leone for the journey they had undertaken and expressed great admiration for the manner in which they had strategically articulated their issues. She reminded the gathering that women were not commodities and should be treated as equal partners from birth to death.

The message on behalf of the Executive Representative to the Secretary General (ERSG) in Sierra Leone, H. E. Mr. Toyberg Frandzen, was read out by Dr. Wondimagegnehu Alemu, Resident Coordinator a.i. and representative of the World Health Organisation. The ERSGs statement pointed out to the many recent and positive developments that have transformed the nation into a fertile environment for the realisation of women's human rights. He also made mention of the many UN initiatives, like the Women's Situation Room, which have left the women eager to participate in strategic debate and engage in developmental issues. He spoke about the timeliness of the sittings of the Commission of the Status of Women, to which the UN has supported the participation of a number of representatives both from Civil Society Organisations and the Government of Sierra Leone. 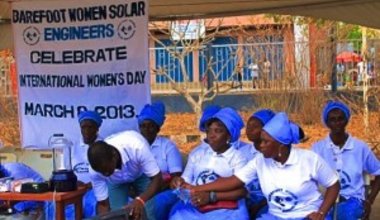 Madam Blair stands out as one of the leading global female icons to Africa's women. She was in Sierra Leone to also launch the national network for women entrepreneurs (OWNERs), through her Cherie Blair Foundation for Women. The foundation was set up in 2008 and started work in Sierra Leone in 2012, in partnership with the African Foundation for Development (AFFORD-SL), to help women build small and growing businesses in developing and emerging markets so that they can contribute to their economies and have a stronger voice in their societies. The network is already creating substantial impact in the areas of business incubation and small enterprise development. The ultimate goal of the project is to increase the number of women-led sustainable businesses in Sierra Leone, thereby creating employment opportunities and strengthening the local private sector.