12th December 2009 - To end the celebrations in Freetown, a friendly football match was organized between UNIPSIL and HRCSL. HRCSL and civil society organizations working in the area of human rights formed a team which played against UNIPSIL. The match which was played at the national stadium practicing field initially ended in a draw-1:1. UNIPSIL team emerged victorious after scoring five penalty shots as against four from the combined team.

11th December 2009-Symposium on theme "Embrace Diversity, End Discrimination"
In collaboration with the United Nations, the Human Rights Commission of Sierra Leone (HRC-SL) on the 11th December 2009 also organized a one day Symposium in commemorating the International Human Rights Day with the theme: "Embrace Diversity, End Discriminations" at the National Stadium Presidential Lounge.

Mr. Edward Sam- the Chairperson of the Human Rights Commission noted that as they come to the close of the 16 days of activism against gender violence, people should remember that women, children and persons with disability as well as the elderly and the poor usually experience discrimination, thereby limiting their enjoyment of civil and political rights as well as economic and social rights, adding that the theme of this year's celebrations calls on every one to work to end discrimination based on race, gender, ethnicity and nationality.

Solidarity statements were made by representatives from various organizations to deliberate on the theme. Some of the institutions that made such statements were: National Commission for Democracy, Inter Religious Council from both Muslim and Christian perspective, UN System – UNIFEM, Members of Parliament and Tribal headsmen 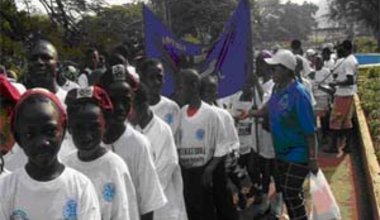 In Sierra Leone's capital Freetown, the day's celebration started with a grand march past from Victoria Park to Attouga Stadium in the east end of Freetown by staff of HRCSL, UN agencies, school children, civil society groups, other organizations and various cultural dancers. The ceremony showcased Sierra Leone cultural diversity as the cultural dancers were from different ethnic groups. Several banners with human rights messages were displayed. The ceremony was climaxed by performances from various groups including the blind school portraying human rights and speeches made by national and international stakeholders

UNIPSIL Human Rights Section also supported the distribution of T-shirts, banners, tapes on both the TRC report and recommendations, and the UDHR. The national report on; "The State of Human Rights in Sierra Leone 2008" by the National Commission for Human Rights-HRCSL was also distributed to all stakeholders within each of the five districts in the northern region. 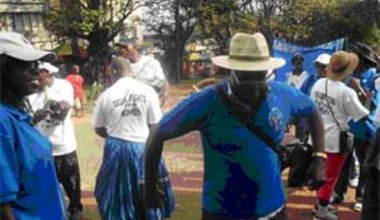 Membership of the Human Rights Committee in collaboration with UNIPSIL Human Rights and Rule of Law Section and the Human Rights Commission of Sierra Leone commemorated the IHRD on the theme "Embrace Diversity, End Discrimination". The day was characterized by a march-pass which started at the centre of Koidu town (Opera) going through the main Kainkordu Road and ending at the Koidu City Library where statements were delivered by various speakers including the Mayor of Koidu city, representatives of Ministry of Social welfare, Gender and Children's Affairs, IRC, NMJD, NEW, SLUDI. The United Nations High Commissioner for Human Rights' statement was delivered by HRO; while the Secretary-General's statement was read by the OiC of UNDP and Area Security Coordinator in Kono. During this day, the National Election Watch launched a Handbook on Civic Education on electoral and governance issues. The day was climaxed by cultural performances by a group known as the Voice of the Blind in Kono with a quiz competition on human rights instruments (CRC, CRA, UDHR, etc.) for four secondary schools in Koidu. 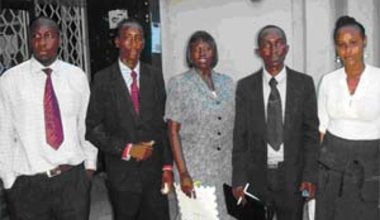 8th December, 2009- Drama Competition on the theme-"Embrace diversity, End discrimination"
A drama competition for elementary school pupils in Freetown was organized centered on this year's theme-Embrace Diversity, End Discrimination. The competition was witnessed by pupils and staff of participating schools as well as other invited schools, representatives from various NGOs, members of the diplomatic core, Staff of UNIPSIL Human Rights Section, Commissioners and staff of the HRCSL and other distinguished personalities. Four schools participated in the competition and these include The Tower Hill Municipal School, The Baptist Primary School, St Edwards Primary School and the Islamic Primary School. The Baptist primary School emerged victorious and won a cash prize as well as teaching and learning materials. Tower Hill Municipal, Islamic Primary and St Edwards schools came second, third and fourth respectively. All Consolation prizes of school materials were given to the other three schools 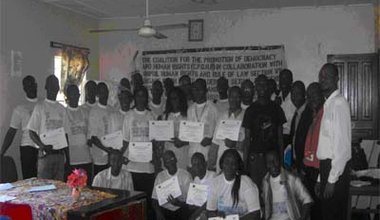 Engaging Faith Based Leaders on Gender Based Violence
As part of its programme for the 16 days activitism in Freetown, UNIPSIL Human Rights Section collaborated with one of its partners, a local human rights organization- Coalition for the Promotion of Democracy and Human Rights (CPDHR) to engage religious leaders in the fight against SGBV. A one day training workshop was organized for 50 religious leaders in Freetown to initiate a dialogue on issues like violence against women, international and national instruments against SGBV and to discuss the role that these key opinion shapers can play in combating violence against women considering the fact that faith and religion play a vital role in the lives and cultures of people in Sierra Leone and how leaders of churches and mosques can play a powerful role in shaping attitudes, opinions and behavior of community people. Discussions on Sierra Leone Gender Justice Laws climaxed the training programme.