Staff of various electoral management bodies discussed challenges and proposed strategies for persons with disabilities to vote and be voted for.

On 17th and 18th April 2012, the United Nations Integrated Peacebuilding Office in Sierra Leone (UNIPSIL) organized a training of trainers on political participation of persons with disabilities at the Bank of Sierra Leone Complex, Kingtom. The programme was developed by the Human Rights Section of UNIPSIL in collaboration with the Directorate for Training of NEC, and funded by the Office of the High Commissioner for Human Rights (OHCHR).

A total of 35 participants were drawn from NEC, the Political Parties Registration 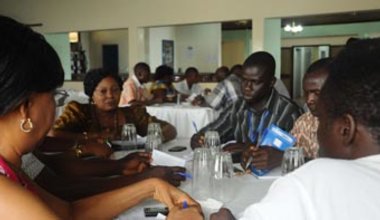 Commission (PPRC), the Ministry of Social Welfare, Gender and Children Affairs (MSWGCA), the Sierra Leone Union on Disability Issues (SLUDI), National Election Watch (NEW) and the Human Rights Commission of Sierra Leone (HRCSL). Approximately half of them were NEC's Voter Education and Training Officers, one per each district of the country.

The objective of the training was to get the actors who will be involved in the upcoming elections in November 2012 acquainted with the essential knowledge on the right of persons with disabilities to participate in the political and public life. The challenges faced by persons with disabilities in the electoral process were identified and discussed, whilst specific solutions were proposed to enhance the full participation of different categories of persons with disabilities. The participants will be now responsible to share the capacity acquired in order to contribute to create a disability sensitive and responsive electoral process for the 2012 general elections and subsequent ones. Beneficiaries of this second round of training were identified during the programme and will include staff of the participating organizations, NEC's ward coordinators, Ward Electoral Education Committees (WEECs), members of the Election Security Committee, political parties (at district level), CSOs and DPOs, the media, local and community authorities. In her opening statement, the Chief of the Human Rights Section of UNIPSIL Ms. 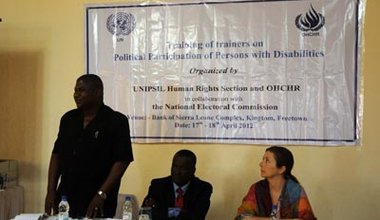 Beatriz Balbin said that Sierra Leone, as a signatory of the Convention on the Rights of Persons with Disabilities, has to guarantee the right to vote and contest for persons with disabilities by ensuring appropriate and accessible voting procedures, facilities and materials. The enactment of the Persons with Disability Act 2011, she added, contributed to adjust Sierra Leone's national legal framework to its international obligations. However, a recent Report on the Rights of Persons with Disabilities in Sierra Leone (available at www.unipsil.unmissions.org) jointly issued by UNIPSIL/OHCHR in December 2011 found that persons with disabilities face a variety of barriers to fully participate in political processes and to be represented in the government. Long queues, excessive distance from the polling stations, vulnerability to intimidation and violence, difficulty in accessing the facilities and respect for secrecy for those who need assistance were among the most recurrent obstacles reported. Training on political participation of persons with disabilities for NEC staff and others who will be directly involved in the conduct of the elections in November 2012 was among the recommendations. UNIPSIL will soon release a Braille version of the report to ensure a wide dissemination among persons with visual impairments.