With the general elections only few weeks away, UNIPSIL Human Rights Section has conducted, in collaboration with the National Electoral Commission (NEC), three regional training workshops on full and effective political participation for persons with disabilities from 8th to 13th September. 106 participants with different types of disabilities were selected among registered voters from all districts and will be responsible to disseminate the knowledge acquired to their communities.

With the general elections only few weeks away, UNIPSIL HRS saw the need to engage persons with disabilities to promote their full and effective participation in the upcoming political process. The right to vote and be voted for is established by the Sierra Leone Constitution of 1991 and articulated in the Electoral Laws of Sierra Leone. However, it was not until the enactment of the Persons with Disability Act, 2011 that provisions were put in place to adequately respond to the needs of persons with disabilities in the country. According to Section 29 of the Persons with Disability Act, 2011, the 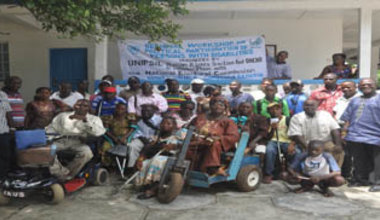 National Electoral Commission (NEC) should ensure that polling stations are made accessible to persons with disabilities and should provide such persons with the necessary assistive devices and services to facilitate the exercise of their right to vote. During the voter registration process, accessibility needs had been taken into account and NEC had shown a good degree of flexibility in finding acceptable interim solutions in the stations that had accessibility limitations. While these arrangements are important to ensure full and effective participation in public life for persons with disabilities, a 2011 UNIPSIL/OHCHR public report on the rights of persons with disabilities in Sierra Leone found that physical access to voting facilities is not the only challenge they face. Persons with disabilities are more highly vulnerable to intimidation and active political participation is limited by factors such as financial constraints, stigmatization, lack of family or community support, and lack of self-confidence. 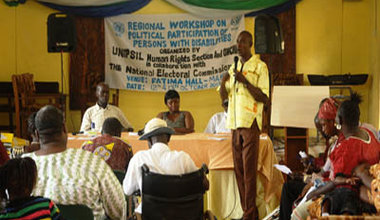 disabilities, findings and recommendations from UNIPSIL/OHCHR Report. Training officers from NEC facilitated sessions on voter education (specific information was also given on voting procedures for the visually impaired), while other partners, including the Human Rights Commission of Sierra Leone (HRCSL), the Political Parties Registration Commission (PPRC) and the Sierra Leone Union on Disability Issues (SLUDI), addressed the participants. The training also included group interaction and plenary discussions focusing on strategies to engage politicians/candidates on disability issues during the campaign and to disseminate information from the training to other PWDs. The group interactions also drew shared experiences and lessons learnt by PWDs from the previous electoral processes.