Freetown, 19 March 2013 — With Sierra Leone recording one of the fastest growth in human development index in African since 2000, the Minister of Foreign Affairs and International Co-operation, Dr. Samura Kamara has launched the Human Development Report 2013 titled "The Rise of the South: Human Progress in a Diverse World" at the State Hall, Parliament building in Freetown, yesterday 19th March 2013, attended by ministers of government, foreign diplomatic missions, members of parliament, senior government officials, civil society activists and representatives from the academia.

Dr Samura Kamara said that the launch of the report in Sierra Leone "could not have been better timed especially as Sierra Leone is nurturing and deepening South-South Partnerships." Adding that even though many Least Developed Countries " ... are not yet fully participating in the rise of the South" but that "Many have begun to benefit from South-South trade, investment, technology transfer and humanitarian assistance."

The Minister of Foreign Affairs and International Cooperation added that "South-South and Triangular cooperation has increasingly become the new international cooperation modality in the face of inadequacy of Official Development Assistance (ODA), offering developing countries and transition opportunities huge possibilities in their individual and collective search for sustained economic growth and human development"

Dr Kamara also pointed to a number of practical examples of South-South engagement ranging from the various bilateral, multi-rateral and tripartite arrangements involving Arab Funding Agencies, ECOWAS, Cuba and the India-Brazil-South Africa Trust Fund. He added "Sierra Leone is a beneficiary of a grant of US$1 million capacity building programme through UNDP-managed Trust Fund contributed by India, Brazil and South Africa (IBSA) which targets the Ministry of Foreign Affairs and International Cooperation, the Cabinet Secretariat and the Office of the President" A point reiterated by Dr Julius Sandy, Director of Public Sector Reform who said "The IBSA project is an example of how South-South expertise is helping to rebuild our civil service."

Sierra Leone's HDI value for 2012 is 0.359—in the low human development category—positioning the country at 177 out of 187 countries and territories. Between 1980 and 2012, Sierra Leone's HDI value increased from 0.255 to 0.359, an increase of 41 percent or average annual increase of about 1.1 percent. In the 2011 HDR, Sierra Leone was ranked 180 out of 187 countries. However, it is misleading to compare values and rankings with those of previously published reports, because the underlying data and methods have changed.

UNDP Country Director Ms Mia Seppo said at the launch that the rise of the South is creating opportunities for Southern and Northern countries to collaborate in new ways to advance human development and confront shared challenges such as climate change, trade, technology, and more importantly, the fight against poverty and inequality.

Ms Seppo added that there are fundamental "drivers of change" 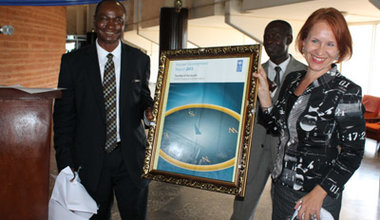 which confirms a key message underlying human development reports and which UNDP advocates for, namely that economic growth does not necessarily translate into human progress if there is not significant investments in people's capabilities – education and skills, nutrition and health. Pragmatic policies, focused on job creation, women and youth empowerment and improvements in service delivery are also important.

Civil society activist Abu Brima called for citizens voices, especially youths and women "...whose voices have been margnalised in many government led national development agenda to be taken more seriously if any lasting sustainable human development can be achieved in Sierra Leone and globally." He added further that "Many times, conferences and meetings, like the agenda for prosperity, where the country's development agenda is discussed, are attended disproportionately by foreign experts, diplomats, government officials and foreign development advisers who more often design policies in their own interests with the voices of communities and ordinary people effectively absent and excluded."

The Human Development Report 2013 argues that the rise of the South is radically reshaping the world of the 21st century, with developing nations driving economic growth, lifting hundreds of millions of people from poverty, and propelling billions more into a new global middle class.

"The rise of the South is unprecedented in its speed and scale," the 2013 Report says. "Never in history have the living conditions and prospects of so many people changed so dramatically and so fast." This phenomenon, according to the 2013 report, goes well beyond the so-called BRICs, middle income countries often represented by Brazil, Russia, India and China. The Report shows that more than 40 developing countries have made greater human development gains in recent decades than would have been predicted. These achievements, are largely attributable to sustained investment in education, health care and social programmes, and open engagement with an increasingly interconnected world.