UN standing behind the women of Sierra Leone

UN standing behind the women of Sierra Leone

UN agencies in demonstration of their support to women's issues, have participated fully in a two day planning meeting organised by UN Women in Bo. "We, the women of Sierra Leone, could do lots more with energy" said Dr. Stephen Kargbo, Head of UNIDO, as he revealed his vision "to see more women take on leading roles beyond Parliament, into the private sector".

Dr. Kargbo re-pledged UNIDO'S loyalty and dedication to the women's movement in Sierra Leone, giving assurance that UNIDO, like all the other UN agencies, share the common responsibility to support the Government in the pursuit of women's economic empowerment.

UN Women's Ag. Country Manager, Madam Regina Amadi-Njoku, spent two full days working with the women of Sierra Leone on how to present their issues strategically in order to capture the attention of a nine-person high level delegation that will be visiting the country during the period of the International Women's Day celebrations. 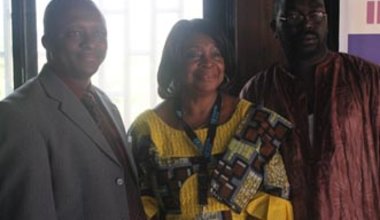 women's agenda gain momentum in the targeted areas of energy, enterprise development, governance and heath" stated Madam Amadi. She expressed appreciation and respect to the women of Sierra Leone for coming together to address their issues and especially for the role they played during the recent elections through the Women's Situation Room. She acknowledged the suffering endured by the Sierra Leonean women as they told their stories from the warring days, noting how this has left them stronger and thirstier for their rights.

"The women of Sierra Leone have good reason to celebrate... and now so many favourable events are happening simultaneously, thereby creating an important space for a momentous celebration."

Madam Amadi assured the women that they had so much working for them, alluding to the various human rights instruments left behind as part of the legacies of the Special Court and Truth and Reconciliation Commission, and the ongoing review of the country's third Poverty Reduction Strategy Paper with a whole stand alone pillar built on gender – putting Sierra Leone as one of the first countries to lead this initiative.

Furthermore, she mentioned the President's, H. E. Dr. Ernest Bai Koroma's, strong commitment to the enactment of the Gender Equality Bill and commended organisations like the Women's Forum Plus, APPWA (All Political Parties Women's Association) and the Sierra Leone Female Parliamentary Caucus (SLEFPAC), whose relentless efforts are clear indicators of women's quest for their rights. She applauded the determination of the Minister, Social Welfare Gender and Children's Affairs, Mr. Moijue Kaikai, to make gender a top priority of his ministry, finishing by saying that all this has made Sierra Leone a conducive environment to address the deficit of women's rights.

The lead facilitator of the retreat, Ms. Kenyeh Barlay, set the stage of the retreat deliberations by strategically tracing the journey of Sierra Leone's women - where they have been; where they are today and where they would like to be. She brought back the memories of the women into sharper focus, when she went back into history and gave a technical interpretation of the issues identified.

At the end, the other UN agencies present - UNAIDS, UNIPSIL, UNICEF and UNFPA – expressed their appreciation of the quality of the participants and the content of the debate.