14 November 2012 (Freetown, Sierra Leone) Amidst hundreds of youth chanting, "no to violence," the head of the United Nations in Sierra Leone visited the country's east earlier this week and appealed for peaceful elections.

Unlike previous polls, Sierra Leoneans are in the lead in the forthcoming elections – the third since the end of the civil war one decade ago. 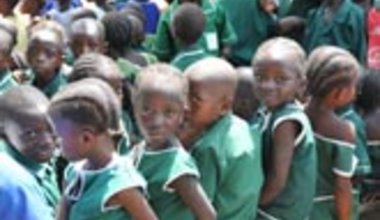 In a village in the Kono district on Monday, Jens Anders Toyberg-Frandzen, the Secretary-General's Executive Representative, was greeted at an outdoor event by hundreds of schoolchildren of all ages who were singing the country's national anthem.

"Looking at the youth," he said, is a "reminder that we all owe them a great future."

The Executive Representative stressed that the responsibility for this lies primarily with Sierra Leoneans themselves and called for peace because children "deserve to be able to grow up in a society that is secure and safe."

One of the civil society groups taking part in the event was Uniform Solution, comprising spouses of law enforcement officials.

Mariama Munu, wife of Sierra Leone's Inspector General of Police, underscored the need for respect for the rule of law. 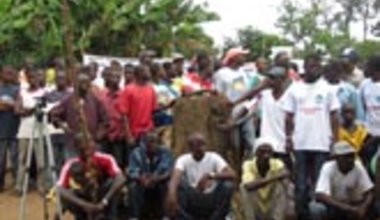 While in Kono, Mr. Toyberg-Frandzen, joined by diplomats based in the capital, Freetown, also discussed this weekend's elections with the region's leaders, and representatives from the security sector, national institutions, political parties and civil society.

Some 2.7 million people have been registered to vote in the elections, with biometrics being used for the first time in voter registration.

In September, the Security Council extended until the end of March 2013 the UN mission assisting Sierra Leone with peacebuilding and long-term development, known as UNIPSIL.