Freetown, 13th August 2012 : The Executive Representative of the United Nations Secretary-General (ERSG) in Sierra Leone, Mr Jens Anders Toyberg-Frandzen has called on the government "... to continue to give the youths the priority they rightfully deserve in society" during a "Youth Festival of Music, Drama, Film and Discussion" to mark this year's International Youth Day at the Lagoonda Complex, Freetown 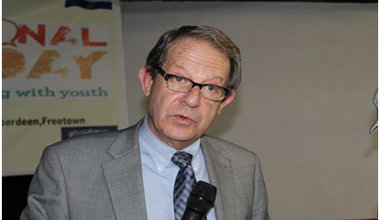 Mr. Toyberg-Frandzen also re-echoed the statement of the UN Secretary-General that young people should be "an effective and equal partners" and not passive beneficiaries of development interventions adding that "Youth also want a seat at the table – a real voice in shaping the policies that shape their lives. We need to listen to and engage with young people"

National Youth Commissioner, Mr. Anthony Koroma, said young people in Sierra Leone, like those in many parts of the world are facing serious challenges relating to employment, skills and opportunities which the Government of Sierra Leone through the National Youth Commission (NAYCOM) and support from national and international partners including the International Labour Organisation, UNDP, World Bank, GIZ and UNESCO "who are providing resources to the commission to ensure that the gaps of youth empowerment in Sierra Leone are addressed." 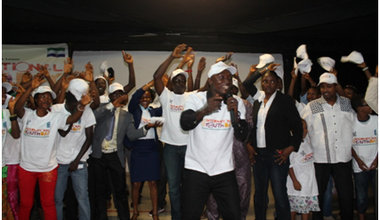 keen to continue the support to youth empowerment in Sierra Leone saying ".... we want the youth to take advantage of this opportunity by using their unlimited energy and potentials."

Mohamed Abchir further stated that "Harnessing the potential and capacity of Sierra Leonean youth to build a peaceful and prosperous future should be pivotal in the forthcoming " Agenda for Prosperity"."

Mr. Mohamed Abchir also explained to the packed Lagoonda Complex hall that over the past years, UNDP's intervention in the area of youth employment and empowerment have included providing rapid employment opportunities and income generating activities for young people, supporting the Ministry of Youth Employment and Sports and the National Youth Commission to ensure the participation of young people in the decision making processes in the country.

The 12th of August every year has been designated as International Youth Day. This day has been set aside by the United Nations to recognize efforts of the world's youth in enhancing global society. UN Secretary-General, Mr. Ban KI-Moon said in an earlier message to mark the Day said: "Today's generation of youth – the largest the world has ever known, and the vast majority of whom live in developing countries – has unprecedented potential to advance the well-being of the entire human family," warning of a possible "lost generation" if urgent measures are not put in place.

Marking the Day, UN Headquarters in New York held a series of six Google+ Hangouts on themes related to the priority areas of the Secretary-General's Five-year Action Agenda and the development of a UN System Wide Action Plan on Youth. These include employment; entrepreneurship; education, including on sexual and reproductive health; political inclusion; citizenship; and the protection of rights.