Fostering Cooperation Among the Military and Police, through sports.

Fostering Cooperation Among the Military and Police, through sports.

As part of the joint training project for the Republic of Sierra Leone Armed Forces (RSLAF) and Sierra Leone Police, funded by the Immediate Response (IR) Peace Building Fund, aimed at fostering cooperation and collaboration, a joint security sector sporting competition, was held for two days, from 01/04/2011 to 02/04/2011 at the Hockey pitch, inside the RSLAF base in Wilberforce, Freetown. Some elements of the Prisons and Fire Force also participated. Competitive events included both men and women's Volleyball and Football teams. The Ministers of Internal Affairs, Defense and Deputy Minister for Lands, graced the opening ceremony.

Also present were representatives of the National Coordinator, Office of National Security, Chief of Defense Staff, Inspector General of Police and the ERSG, who was ably represented by the UN Police Adviser, with his team. At the impressive opening ceremony, which paraded an array of top, middle level and rank and file of members of the security sector, brief statements were made, by the above-mentioned dignitaries. The tenor of their speeches all centered on the need to continue to enhance the cooperation and collaboration between them, in the very important and onerous duties they perform. Both Ministers struck a common cord, by enjoining the participants to rev up their talents, which had the potential to catapult them to national and international prominence and limelight. 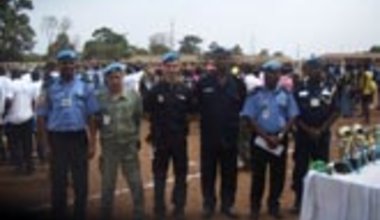 In his speech, the UN Police Adviser, who represented the ERSG, went on the memory lane, to remind them of the high level of animosities and violence between personnel from both institutions which had threatened to undermine their necessary operational cooperation in the past. He informed the gathering that there was no better time than now, for all of them to work together, in a symbiotic manner, to proudly provide security for the people of Sierra Leone, who are gradually, but patriotically recovering, from the adverse consequences of conflict, that devastated the country for ten unforgettable years.

Prior to the speeches, a joint military and Police band had marched in the competitors, who appeared in various colorful sporting jerseys, halting in front of glistering trophies, procured from the UN PBF Fund. Regional competitions were earlier held, in the four regional headquarters of the country, to produce teams for the finals in Freetown.

At the end of the competitions, trophies were awarded to champions and runners up in both Volleyball and Football. The competitions were organized in such a way that competitors were mixed, as opposed to a situation, where the military competed against the Police. Invariably therefore, everybody was a winner! Friendship was fostered and the air of superiority of one over the other, seemed diffused.
On the whole, the atmosphere was convivial and it is pertinent to mention that the UNIPSIL was highly praised for this feat. UNIPSIL UNPOL Officers and UNOPS personnel played a prominent role in organizing and conducting the highly successful competitive event