18 November 2012 – Secretary-General Ban Ki-moon on Sunday congratulated the people of Sierra Leone for the peaceful and orderly elections held yesterday, the first to be run entirely by the Government since the end of the West African nation's brutal civil war 10 years ago. 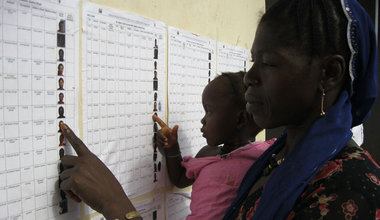 The voter turnout was reportedly high for the four elections – presidential, parliamentary, local council and mayoral – held on Saturday, the results of which will not be known for about 10 days.

"The high voter turnout and the remarkable calm displayed by the country's citizens as they cast their votes are a clear manifestation of their desire for peace, democracy and development," said a statement issued by Mr. Ban's spokesperson.

"As the country awaits the announcement of final results, the Secretary-General calls on Sierra Leone's political leaders, parties and their supporters to accept the will of the people and to put their country above any other interests so as not to jeopardize Sierra Leone's hard-won peace," it added.

Mr. Ban also urged all sides to work together and uphold their commitment to the people of Sierra Leone to bolster stability and unity.

The elections will be the country's third since the end of its civil war, and the second since the withdrawal of the peacekeeping operation known as the UN Mission in Sierra Leone (UNAMSIL) in December 2005. That mission was replaced by various other UN offices, most recently the UN Integrated Peacebuilding Office (UNIPSIL), which focuses on political and development activities.